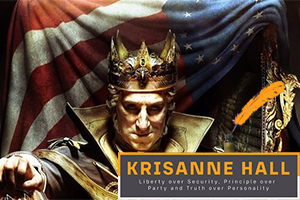 The current application of State and local authority to mandate the closure of businesses and require the people to restrict their activities to a list of government approved venues under the threat of force and punishment, is antithetical to everything America was built upon.  These orders are arbitrary, deny due process, and are rife with unbridled discretion.

Arbitrariness is the quality of being “determined by chance, whim, or impulse, and not by necessity, reason, or principle.”  A shelter in place order that requires places of worship to close, where a finite number of people attend for less than a few hours once a week, but then claims that Wal-Mart and liquor stores, where a limitless number of people come and go every day, all day may remain open, is completely arbitrary.  Where is the science, where is the reason that says that people sitting in a church are more susceptible to a virus than those who go to Walmart or the liquor store?  The answer is simple, it doesn’t exist.  The decision to close the church, a shoe store, or private vacation rental property, and not Walmart is based upon a whim and an impulse, not facts or reason.  By legal standard a government’s actions are arbitrary and capricious when they are founded upon unreasonable grounds or made with without any proper consideration of circumstances, deny due process and prejudice substantial rights.  Therefore, the government’s exercise of authority in these Shelter In Place Orders to pick and choose which businesses can stay open and which cannot is by definition arbitrary and capricious.

A government’s arbitrary determination on which businesses can stay open and which ones cannot is tantamount to a regulatory taking.  There is no warrant issued for the seizure of this property. No mechanism for the business owner to challenge the government’s arbitrary determination to close their business.  When the government threatens a business owner or forcibly demands that business close, the business owner is being effectively deprived of the economic value of its property and the principal private use of that property.  Whenever a government takes private property for public purpose, both State and US Constitutions require that business receive proper due process consideration followed by just compensation equaling a fair market value for that property.   These Shelter In Place orders neither secure due process nor do they even mention reimbursement of fair market value.

Learn YOUR Constitution at LibertyFirstUniversity.com – The Constitution as if the founders themselves were teaching it.  An education worthy of the highestest institutions of learning because they won’t teach truth anymore!

Every Constitution of every State in the Union, as well as the US Constitution, acknowledge the Rights to freedom of religion and to peaceably assemble as fundamental rights.  Many State Constitutions, as well as the US Constitution, describe these rights as “inalienable rights” or “Natural Rights” meaning they do not come as permissions from governments, but pre-exist all law and government.  These Rights are not the products of governments.  To the contrary, governments exist with sole purpose to secure these rights for the individual.  Inherent in the securing of these rights is the prohibition against government defining the parameters of these rights.  When the government can arbitrarily decide that the only “legal” assembly is one of ten people or less, there is no longer a right to peaceably assemble, but a permission granted under certain limited and confining terms.  One of the most essential reasons for the right to peaceably assemble is the power the assembly brings in the Right to Petition the Government for a Redress of Grievances.  It is a truly despotic government that can create unjust and unconstitutional activity and then also possess the power to set the limits and parameters upon which the people can protest those laws.  The very same can be said about the Right to freedom of religion.  When a government can tell a body of people when, where, and how many can “legally” meet in their church, that government is defining religion and that is antithetical to everything that America is founded upon.  What is even worse, these Shelter in Place Orders not only do all of that, many have also determined that the definition of freedom of religion can be relegated and confined to an internet broadcast and all those who are unable to meet this order are simply denied their right to worship and threatened by force of government to have no assembly whatsoever.

Finally, these Shelter In Place Orders often establish that failure to comply with the order will result in civil or criminal penalties.  Yet these orders do not define the elements of their newly invented crime, the evidence necessary to prove violation of the order, nor do they establish the affirmative defenses available to the accused.  In their attempts to “ensure enforcement” of their orders, those governments have established those terms with a complete disregard for due process, evidentiary rules, and the Rights of the people to be innocent until proven guilty.  As these orders stand, it is up to the individual officer to make the determination of what is proper evidence of compliance and what is insufficient evidence that equates to a violation: American courts call that “unbridled discretion” and for decades have held that to be fundamentally unjust.

What makes all of this so very tragic is that America’s founders pledged their lives, fortunes, and sacred honor to throw off the very artifices of government we are experiencing today.  James Otis, Jr,  a lawyer whom our founders termed as the “midwife to liberty,” brought a valiant legal battle against the laws of Parliament that attempted to legally authorize what our governors, county commissioners, city councils, and mayors are doing today.  He referred to these laws as “the worst instrument of arbitrary power, the most destructive of English liberty and the fundamental principles of law, that ever was found in an English law-book.”  In an America that once declared independence from Kings forever, we have all too quickly succumbed to king-like authority under the wiles of fear and necessity.  William Pitt, the Younger would likely remind us that “necessity is the plea for every infringement of human freedom.  It is the argument of tyrants.  It is the creed of slaves.”

Let’s be clear, I am not asserting that the individual should not choose a behavior that respects the most prudent measures available to ensure the best health and welfare of their neighbor.  But when a government uses threat and force to compel behavior and the Rights of the people are ignored and due process denied under the pretense of necessity, the people are not safe, the welfare of the people is not respected and the body of the people are in danger of becoming enslaved by the very government they’ve elected to secure their rights.  Samuel Adams said:

“No people will tamely surrender their Liberties, nor can any be easily subdued, when knowledge is diffused and virtue is preserved.”

At stake are the inherent rights to Freedom of Religion, Freedom of Speech, Freed of Press, Right to Peaceably Assemble, Right to Petition Government For a Redress of Grievances, Rights of Due Process, and Security in Personal Property.  These rights are simply summarized as The Natural Rights of every individual and are derived from the First Law of Nature.

“Among the natural rights of the Colonists are these: First, a right to life; Secondly, to liberty; Thirdly, to property; together with the right to support and defend them in the best manner they can. These are evident branches of, rather than deductions from, the duty of self-preservation, commonly called the first law of nature.” Samuel Adams, 1772

“Liberty must at all hazards be supported…” John Adams, 1765

“What is it that gentlemen wish? What would they have? Is life so dear, or peace so sweet, as to be purchased at the price of chains and slavery? Forbid it, Almighty God! I know not what course others may take; but as for me, give me liberty or give me death!” Patrick Henry, 1775

“Those who would give up essential Liberty, to purchase a little temporary Safety, deserve neither Liberty nor Safety.”  Benjamin Franklin, 1755

Perhaps it is time we begin to educate ourselves on the Constitutional Republic we legally have and the principles that truly make America great, instead of tolerating the authoritarian government we are being subjected to.

Learn YOUR Constitution at LibertyFirstUniversity.com – The Constitution as if the founders themselves were teaching it.  An education worthy of the highestest institutions of learning because they won’t teach truth anymore!

Leave a reply Click here to cancel the reply

I do solemnly swear (or affirm) that I will support and defend the Constitution of the United States against all enemies, foreign and domestic; that I will bear true faith and allegiance to the same; that I take this obligation freely, without any mental reservation or purpose of evasion; and that I will well and faithfully discharge the duties of the office on which I am about to enter: So help me God.

We're not around right now. But you can send us an email and we'll get back to you, asap.